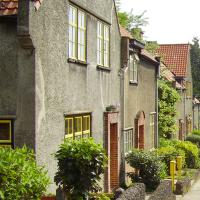 After the First World War, nothing would ever be the same again. Cooperatives were set up to improve the inhuman conditions in which large numbers of people were living. These cooperatives created social housing schemes in every corner of what is now the Brussels region.

In Woluwe, for example, you will find the Kapelleveld estate, where you can see the creations of architects such as Hoste and Antoine Pompe.

The major garden city areas were created in Watermael-Boitsfort with the Floréal and Logis estates, which now regularly serve as the setting for a whole range of films and television series.

Anderlecht has Het Rad/La Roue estate, which served as experimental site for the use of many new materials.

You can choose to visit these estates one at a time, or, if you have come to the city by coach, make a combination of them, which will you allow to compare the differences (and the similarities) between the concepts in relation to the building of social housing, and more particularly to garden estates.