Brussels and its grandest avenues 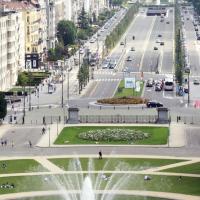 During the reign of King Leopold II, Brussels (finally) acquired a number of stately avenues. The early twentieth century also saw the addition of a number of stunning new creations, which nowadays add to the charm of our city.

Our guides have devised walks along the following avenues:

The Avenue Louise (the place to be in 1900) between the Palace of Justice and the Bois de la Cambre, with the beautiful Solvay House designed by Horta and the Abbey of La Cambre marking its extremities. This walk may be combined with a visit to the Constantin Meunier Museum;

The Avenue de Tervuren between the Cinquantenaire and the Boulevard du Souverain, with its graceful facades in a so-called Beaux-Arts style, the unsurpassed Stoclet House and the Woluwe Park;

The Boulevard Leopold II between Place Rogier and the Basilica of Koekelberg, with its beautiful Art Deco residences, majestic office projects and unique religious architecture;

The Avenue Franklin Roosevelt, built on the remains of the site of the World Exhibition of 1910, with architecture predominantly from the interwar period (Art Deco and Modernism), in combination, on request, with a visit to the Empain residence.