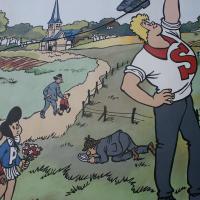 1929 saw not only the birth of Popeye the Sailor man, in Brussels in the same year it was none other than Tintin/Kuifje who saw the daylight!

Belgium thus became a forerunner in the European world of the comic strip. Two weekly magazines – Spirou and Tintin – attracted an army of young illustrators, who themselves would go on to enjoy international renown.

Since 1991 these comic strip celebrities have had their own spot in the heart of Brussels: blank walls have gradually been covered with memories from our childhoods. There are now more than 30 of them: Tintin, Suske and Wiske (Spike and Suzy), Nero, Asterix, Lucky Luke, Blake & Mortimer, to name but a few …

This walk can be done either downtown or in the upper part of the city. If you book the walk during the summer holidays, you can end it just like in the Nero comics – with a Brussels waffle at the Brussels Midi Fair!